Former President Donald Trump warned at his third “Save America” rally on Saturday night that Americans no longer have free speech, describing a powerful system “for media and online censorship” that only presents the Democratic Party’s view of politics, including that Trump is attacking democracy by discussing potential election fraud.

“We have a truly sick election system, it’s got to be changed,” the 45th president told thousands of supporters gathered in Robarts Arena in Sarasota, Florida.

Democrats and Republicans have exchanged barbs since the chaotic 2020 election, which Trump maintains he will not concede, awaiting the results of a complete audit for Arizona’s Maricopa County that has been run independent of the secretary of state’s office. Additional audits are expected to follow in other jurisdictions.

“We can’t let them take away our free speech so we can[‘t] talk about corrupt elections. Otherwise you’ll have … that’s communism. That’s what they do in these communist countries, you have no voice,” Trump warned.

Communist and socialist states like Cuba and Venezuela remain embroiled in repeating cycles of contested elections, with their populations split between recognizing two heads of state, and both sides of politics accusing the other of election fraud.

“Democrats used COVID to cheat. They illegally changed the rules in key states. They stole the votes,” Trump continued. “They abolished signature verification requirements, created a powerful system for media and the online censorship of their opponents, and did everything possible to facilitate fraud just like you would do in a third world country. That’s what happened with this election.”

Trump gave special mention to the Right Side Broadcasting Network (RSBN), which was suspended by YouTube from live-streaming to their channel for a week just hours ahead of the rally. RSBN has carried feeds of Trump’s public appearances since July 2015. Following the suspension, the company migrated to the video platform Rumble to stream Trump’s speech.

The former president also mentioned how left-wing billionaires had allegedly funded unsecured drop boxes in the 2020 election. He named Facebook as an example, referring to reports that Facebook’s CEO Mark Zuckerberg and his wife, Priscilla Chan, partly funded a nonprofit that irregularly distributed $350 million to nearly 2,500 election officials in 48 states and the District of Columbia, which could have helped increased voter turnout for Democrats. 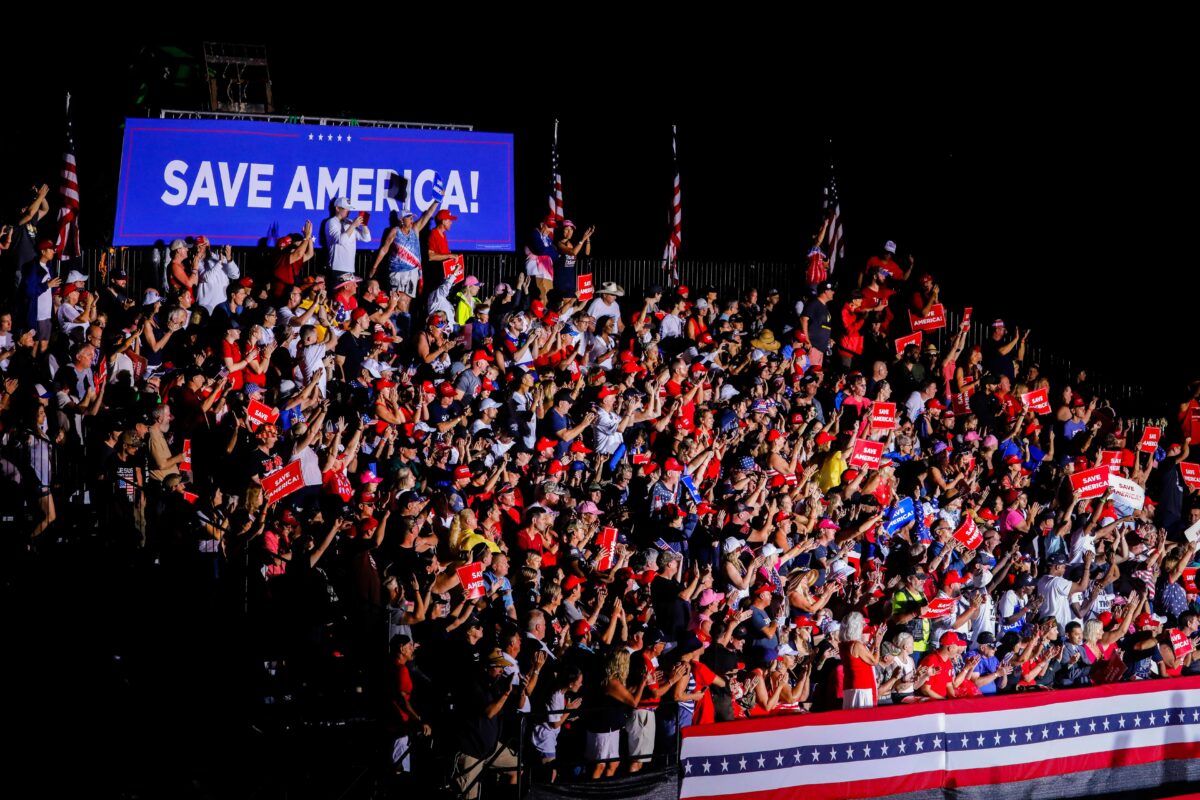 Trump, true to the stated mission of his “Save America” campaign office, said he will continue working to help secure support for “Republicans or MAGA” in the upcoming 2022 elections, with the goal of retaking the House and the Senate.

But in order to do so, the 75-year-old said that actions are needed to restore trust and transparency for all Americans in the nation’s election systems.

“We got them by surprise in 2016. And then they work for four years to make sure it didn’t happen again,” Trump said of the Democrats, accusing them of election fraud.

He again questioned President Joe Biden’s vote count, saying that he found it hard to believe that Biden got more votes from black people than President Barack Obama. Trump said that, like many other things including the Wuhan virus lab leak theory and his border policies, he believes his claims about a “rigged election” will be proven right.

“I wonder what I will be proved right about next. Perhaps it will be the election, perhaps,” he said.

“That’s before the elections, not after the elections,” Trump added, amid his criticism of Democrat actions passed ahead of the 2020 election to expand voter access that he said in effect reduced voter security in the name of needing to allow people to vote from home during the pandemic.

He said that Republicans “will restore the right to free speech in America again, which we don’t have.”

Hundreds of Trump’s supporters had lined up for the event overnight, with a large crowd staying until past 8 p.m. for Trump’s speech despite a thunderstorm ahead of Tropical Storm Elsa.

Trump remarked that if American voters had faith in the integrity of the 2020 election, he wouldn’t have so many people still attending his rallies.

“If we lost the election … I wouldn’t have a crowd that goes beyond what the eye can see, that stays in a thunderstorm,” he said of the crowd.

He then joked that some of the women in attendance were “a mess” from the pouring rain, adding “but the truth is, you look more beautiful now than you did when you went to the beauty parlor … You’re real, it’s great.” 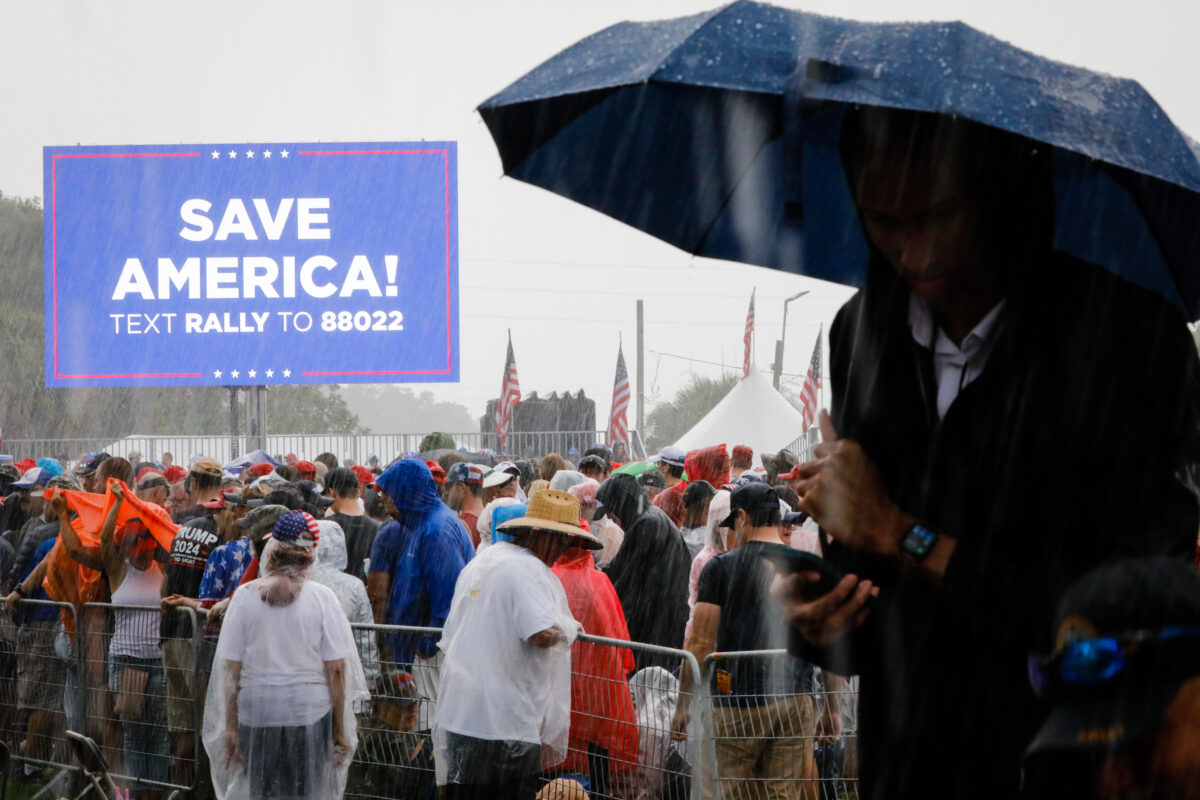 He also dismissed legal efforts launched by New York prosecutors to bring charges against his company, the Trump Organization, and its chief financial officer Allen Weisselberg over “fringe benefits.”

“It’s really called prosecutorial misconduct. It’s a terrible, terrible thing,” Trump said of the legal efforts, contrasting them against cases of murder and human trafficking that he said were not pursued to the full extent by prosecutors. Weisselberg has pleaded not guilty to the charges.

Florida Gov. Ron DeSantis did not join Trump at the rally after both decided the state leader would remain in South Florida to oversee recovery efforts for the condominium collapse at Surfside and preparations for Elsa, according to state GOP Chairman Sen. Joe Gruters, local media reported.

Trump’s speech was followed by a fireworks display in celebration of Independence Day, when “56 brave patriots at Philadelphia proudly declared our independence and boldly proclaimed the eternal truth that we are all made equal by the almighty hand of our creator,” Trump said.

The preceding story was brought to you courtesy of The Epoch Times Click the link to visit their page and see more stories.