LONDON (Reuters) – Digital currency bitcoin has emerged as a rival to gold and could trade as high as $146,000 if it becomes established as a safe-haven asset, investment bank JPMorgan (JPM) said on Tuesday.

Interest in the world’s biggest cryptocurrency has soared this year, with investors viewing bitcoin as a hedge against inflation and an alternative to the depreciating dollar. The rush led to bitcoin prices more than tripling in the past six months to a record peak of $34,800 on Jan. 2.

“Bitcoin’s competition with gold has already started in our mind,” the Wall Street bank’s strategists said in a note, citing recent $7 billion outflows from gold and more than $3 billion of inflows into the Grayscale Bitcoin Trust.

That could mark a new dawn for the volatile digital currency after years as a play for speculators and retail punters.

“Considering how big the financial investment into gold is, a crowding out of gold as an ‘alternative’ currency implies big upside for bitcoin over the long term,” JPM said.

Bitcoin is likely to outshine gold as millennials become a more important component of the investment market over time and given their preference for “digital gold” over traditional bullion, JPM added.

With a market capitalization of $575 billion, the bitcoin price would need a nearly fivefold jump to $146,000 to match the value of private gold wealth held in gold bars, coins or exchange-traded funds, the bank’s note added.

JPM strategists said the upside is conditional on the volatility of bitcoin converging with that of gold in the longer term.

Though JPM sees the possibility of “current speculative mania” propelling bitcoin to between $50,000 and $100,000, it warned that such levels would prove unsustainable until its volatility levels out.

“We note that the spectacular bitcoin rally of the past few weeks has moved bitcoin into more challenging territory, not only in terms of its positioning backdrop, but also in terms of its valuation,” the bank said.

For a graphic on Bitcoin versus gold: 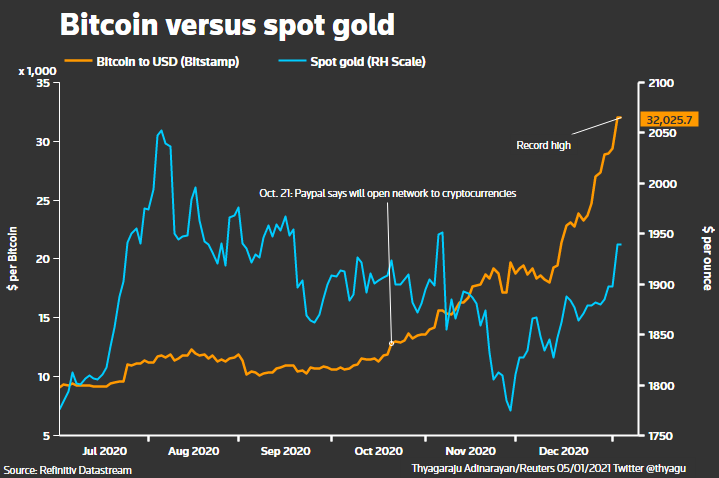